I’ve been in Japan for just about two months now and, as someone who unfortunately speaks zero Japanese, every new “first” still feels like a big accomplishment! This weekend I had a very satisfying “first”— for the first time, I went to see a movie in a Japanese theater, all by myself! And yes, I was careful to make sure that it was only the subtitles were in Japanese and all the audio was in English, but the experience was definitely interesting. Overall, it was very similar to theaters I’ve seen in the U.S.A. and Canada, but I did notice a couple of differences: firstly, I was a little surprised that they asked us to wait until 15 or 20 minutes before the start of the movie to go into the theater. I’m so used to that time being used for advertisements and extra “sneak peeks” (special interviews, trailers and additional information on movies that will be released soon). I was also surprised by the theater itself. The screen was much higher on the wall than I was expecting, and the seats were much lower. The stairs were not nearly as steep. The seats were very comfortable, though, and since it was a quiet day, the theater was not too crowded.

The movie that I took such a special trip out to see was Captain Marvel— and it was definitely worth it! The movie was fun, interesting, and had a fantastic female hero. I definitely recommend it to anyone who likes Marvel movies, superheroes, or fun, action-packed adventures!

Maybe next time I’ll see if I can find a real Japanese movie with English subtitles– after all, movies, music, and TV shows are a useful and fun way to practice listening in a foreign language. Next time you watch your favorite movie on DVD or on Netflix, try changing the language to English and see how much you can pick up! 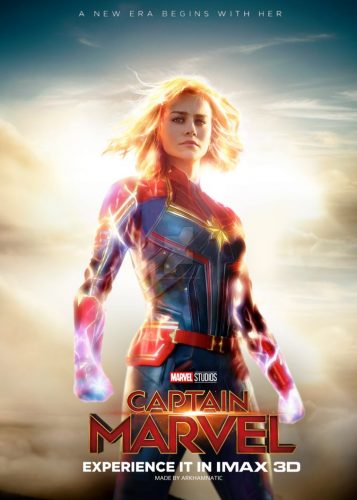