For some reason, I’ve always been a fan of the following painting: 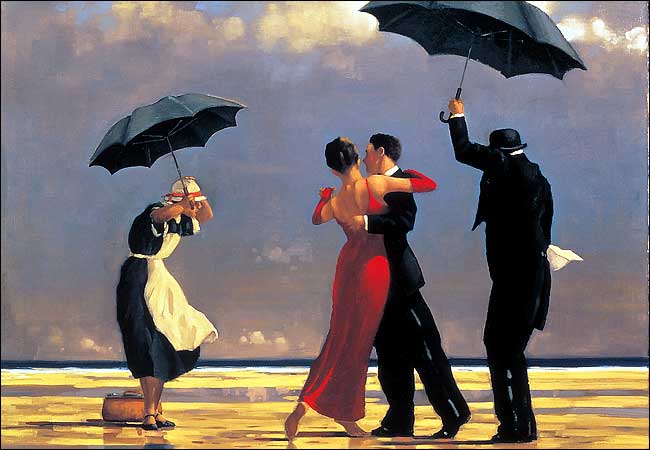 I’d seen it online and in cafes, but I never knew the painting had a name or a controversial history until today. It’s called The Singing Butler and it was painted by Jack Vettriano in 1992. I’m not sure what draws me to this painting, most art critics (and Jack Vettriano himself) would say that the painting is not very good. I don’t stand alone in my admiration, however; reproductions of The Singing Butler are apparently the best selling art-print in the United Kingdom.

There’s something undeniably romantic about the painting. There’s an air of mystery and your brain is forced to fill in the blanks. I like to imagine the maid anxiously calling out for the couple to stop dancing right now because they’ll ruin in their lovely clothes in the sea spray and the rest of the dinner guests will be looking for them and they’ll just catch their deaths in the rain. The couple pays her no mind as the butler continues to serenade them (I imagine he’s singing “Bella Notte” from Lady and the Tramp), spinning in wide circles with his umbrella as a dance partner. The couple themselves are old friends and the twilight holds the possibility of a rekindled relationship…or not. Tonight, they are together and laughing like old times and that’s all that has always mattered.

Where, In the World (Are These Random Places?) – 英会話・英語 アミック

At Amic’s Ishii location, there is a large and fantastically-detailed map covering the front wall of the lobby. As a lifelong map lover, I can easily spend way too much time walking back and forth, exploring the map for new cities, mountain ranges, and islands I have never heard of.

Sometimes I like to look these places up on Wikipedia and Wikitravel just to see what comes up. Other times I do similar random exploration just by zooming in on random places in Google Maps; here are three of my recent “discoveries”:

South Georgia Island: Situated in the South Atlantic about 1000 miles/1600 kilometers east of the Falkland Islands, this British overseas territory has snow cover eight months out of the year. Only about 20 people live there, outnumbered drastically by the literal millions of penguins, reindeer, seals, albatross, and countless other animal species that call the island home. Until recently the island also had a major rat problem, but after a mass extermination effort that involved dropping poisonous bait from helicopters, scientists say the island is once again rodent-free.

Ushakovskoye: A now-deserted settlement on Russia’s Wrangel Island in the far north east of the country, just a few hundred miles from Alaska. The settlement was established in 1920s by the Soviets essentially to keep Britain and America from doing the same. Despite having temperatures that rarely get above freezing, the settlement grew to have electricity, an airport, and even a museum of natural history. Eventually the settlement stopped being subsidized and most residents moved back to the mainland, save for the town’s final resident, who was killed by a polar bear in 2003.

Mount Nyiragongo: Resting on the Rwanda-Democratic Republic of the Congo border is conical volcano Mount Nyiragongo. Its main crater spans over 2km wide and within lies a lava lake that volcanologists think might be the deepest in recent history. Extremely active, the volcano’s lava flows can reach speeds up to 100kmh/60mph and in 2002 it erupted so powerfully that it caused a series of earthquakes in the area that continued off and on for three months.