One of my favorite sports stories comes from the 1974 National Hockey League player draft.

Back then, the player selection process was painfully slow and done via telephone. As a tongue-in-cheek protest to this, Buffalo Sabres general manager Punch Imlach and PR director Paul Wieland decided to use their 11th round pick on an entirely fictitious player. 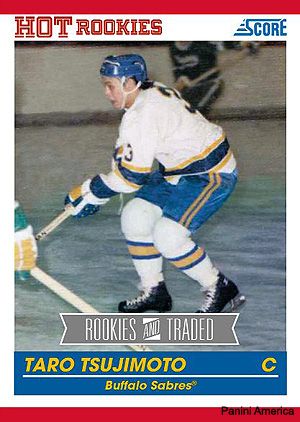 That “player” was Taro Tsujimoto, so-named for a Tsujimoto grocery store just outside Buffalo. According to the Sabres, Tsujimoto was the star of the Japanese Hockey League’s Tokyo Katanas. While the JHL was a real league, there was no team in Tokyo at that time, with katanas being a subtle-sword nod to sabres. With no way to confirm his actual existence, the mystery pick was made official and Taro’s name appeared in newspapers and league publications.

When training camp rolled around that fall, Imlach finally revealed that the pick was a hoax. The official record now shows that the Sabres made an ‘invalid claim’ or no selection at all with their pick.

Even still, Taro continues to live on today: a local sports column goes by the name ‘Taro says…’, fans sometimes chant ‘We Want Taro’ when the Sabres are winning big, and occasionally you can see a Tsujimoto jersey in the stands at the KeyBank Center.